The phenomenon of the deployment of steam as the "driving force of industrialisation" is known to just about everyone from their history lessons. Great Britain is rightly considered to be its homeland and the first use of steam is linked to the mining industry there. However, it was James Watt's improvements that brought about its mass deployment. As early as the early 18th century, the inventor Thomas Newcomen constructed an earlier type of steam engine. He used atmospheric pressure to power it. From the beginning, Newcomen's machines powered pumps in the coal and ore mines of England. Thanks to designers there, they quickly spread to other parts of Britain and soon beyond - to continental Europe and overseas.

The first attempts to export this technology are linked to the Potter family, who lived near Birmingham. They were already involved in the construction of the first machines and in 1718 the middle sons, Humphrey and Isaac, were also involved in plans to build a pumping engine near Venice. Around the same time, Joseph Emanuel, son of the court architect J. B. Fischer von Erlach, was in England.

Almost at the same time, an atmospheric steam engine was being built at the Althandel shaft in Nová Baňa on the basis of a contract between Isaac Potter and Emperor Charles VI. After Fischer arrived in Vienna, he built a machine that pumped water for the garden fountains in the Schwarzenberg Garden in 1722-23.

For mining and technical development in Central Europe, the construction of the atmospheric steam engine by Isaac Potter at Nová Baňa had far-reaching consequences. The early period of its deployment, only 10 years after Newcomen's first engine, shows the uniqueness of the local mining industry. Hungarian mining was undoubtedly one of the main hotbeds of technological innovation in the 18th century, so it is understandable that this English invention was one of the first to head here.

However, the expansion of the steam engine was not only a technical and economic matter, but also a matter of prestige, as evidenced by the Emperor's personal interest. Despite sceptical voices from the ranks of the Court Chamber and the local mining authorities, an English designer was given the chance to build an atmospheric steam engine. The subsequent involvement of the renowned court architect Fischer von Erlach in the construction of steam engines underlines this moment. 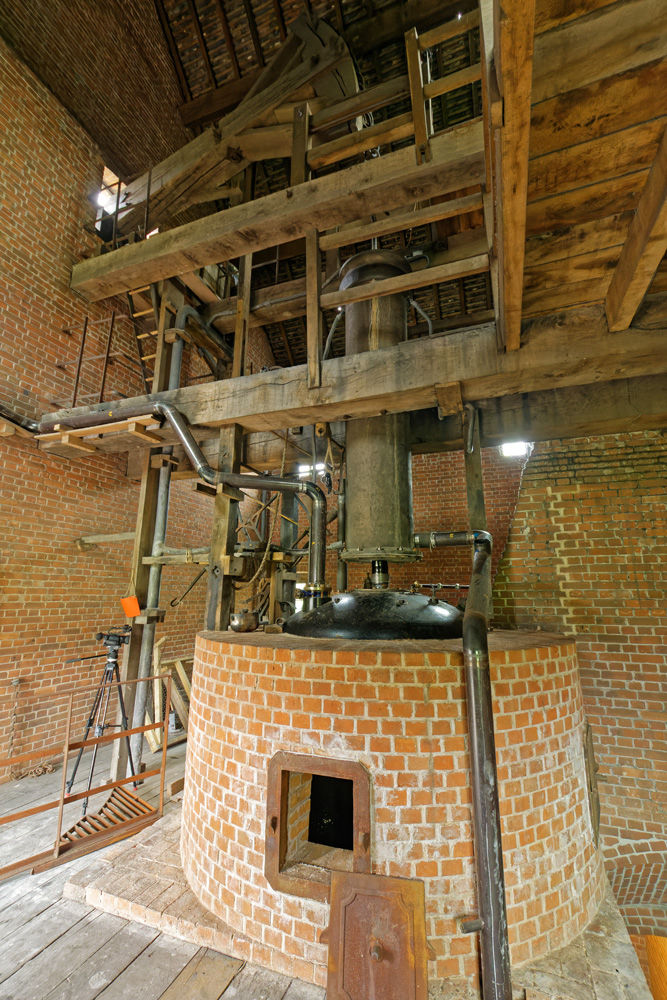 Thomas Newcomen (1664 - 1729) was an English inventor, an ironmonger by profession, and a lay Baptist preacher. In those days, mine waters were a major problem in the coal and tin mines of England. Newcomen became involved in attempts to improve methods of pumping water out of these mines. His ironmongery business specialised in the design, manufacture and sale of tools for the mining industry. Building on Denis Papin's inventions, in 1712 he created the atmospheric steam engine, the first practical fuel-burning engine.

Newcomen's engine proved much better in practice than Savery's "Miner's Friend" pumping machine. However, since Savery's patent on "fire machines" prevented Newcomen from protecting his invention, they joined forces and formed a company of patent holders for this type of machine. The company then sold the license to build atmospheric steam engines to other designers for a fee.

In 1712, they managed to start the first working pumping atmospheric steam engine at Conygree Mine in Dudley, near Birmingham. Subsequently, Newcomen and other partners built several more machines. Improvements to ensure the automatic operation of the engine helped it to spread beyond the mining areas of Great Britain.

Isaac Potter (1690 - 1735) came from a family of constructors involved in building the first Newcomen engines. His brothers built a number of these in England and later attempted to do so in France and northern Italy, where Newcomen's patent did not apply. As early as 1720, Isaac Potter was in Vienna, where he submitted a proposal to the Court Chamber to build a pumping machine in the highly profitable mines of the Kingdom of Hungary. After inspecting and evaluating the possibilities at the Štiavnické Bane (Windschacht) mine (in present day Slovakia), he decided on the smaller Althandel shaft in Nová Baňa (Königsberg). After many trials and tribulations, he started up the machine in 1722, but due to its unstable operation it had to be modified in 1724 by Fischer von Erlach, an imperial engineer from Vienna.

The son of the imperial court architect J. E. Fischer von Erlach (1693 - 1742) went on a study trip to England before 1720, where he became familiar with the construction of atmospheric steam pumping engines. On his return to the continent, he built, at about the same time as Potter built his engine in Nová Baňa, two atmospheric steam pumping engines for fountains in Kassel, Germany, and in the garden of the Schwarzenbergs in Vienna. Thanks to the experience thus gained and a better knowledge of mathematics and mechanics, he was able to improve the unstable operation of Potter's machine in Nová Baňa. The year before, he and two companions founded a company for the construction of atmospheric steam engines, which controlled their construction in the Habsburg Monarchy for the next 20 years. This company was also the nucleus of the new mining industry, which from 1723 mined precious ores in the mines of Nová Baňa. 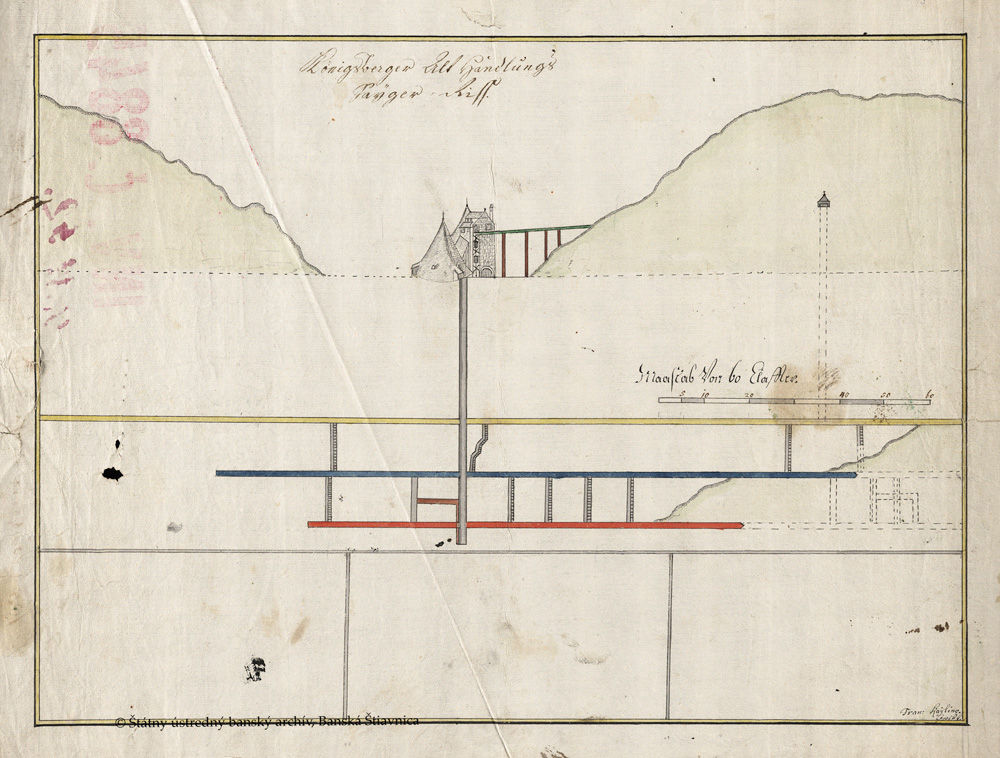 Representation of the Althandel engine house on a mining map from 1729 (Slovak Mining Archive in Banská Štiavnica, Slovakia)

The first decades of the 18th century were marked by persistent problems with groundwater in Hungarian mining towns, as well as the search for a solution to its pumping. It was during this period that the then little-known Englishman Isaac Potter came to the Viennese court with a relatively low cost proposal to pump groundwater out of the mines using steam power. The decision to build the engine was finally taken by Emperor Charles VI himself, who agreed to try Potter's proposal despite the objections of the court councillors.

The construction of the engine was not started at the originally intended mining works at the Horná Bieberova štôlňa mine in Banská Štiavnica, but at the Althandel shaft in Nová Baňa, which was flooded at that time. The actual construction of the engine equipment began in September 1721 and was not only costly, but also brought with it a number of obstacles, which were reflected in a significant time delay of the work itself. One of them was the problem connected with the work of the Banská Bystrica bell-maker Johann Friedrich Klug, who was responsible for the manufacture of most of the necessary parts of the machinery. In his work, he had to cope not only with difficult communication with Potter himself, who only knew English and communicated only through an interpreter, which was not ideal when special requirements for the construction of a new and pioneering engine were necessary. He also had problems with casting parts that were previously unknown to him. 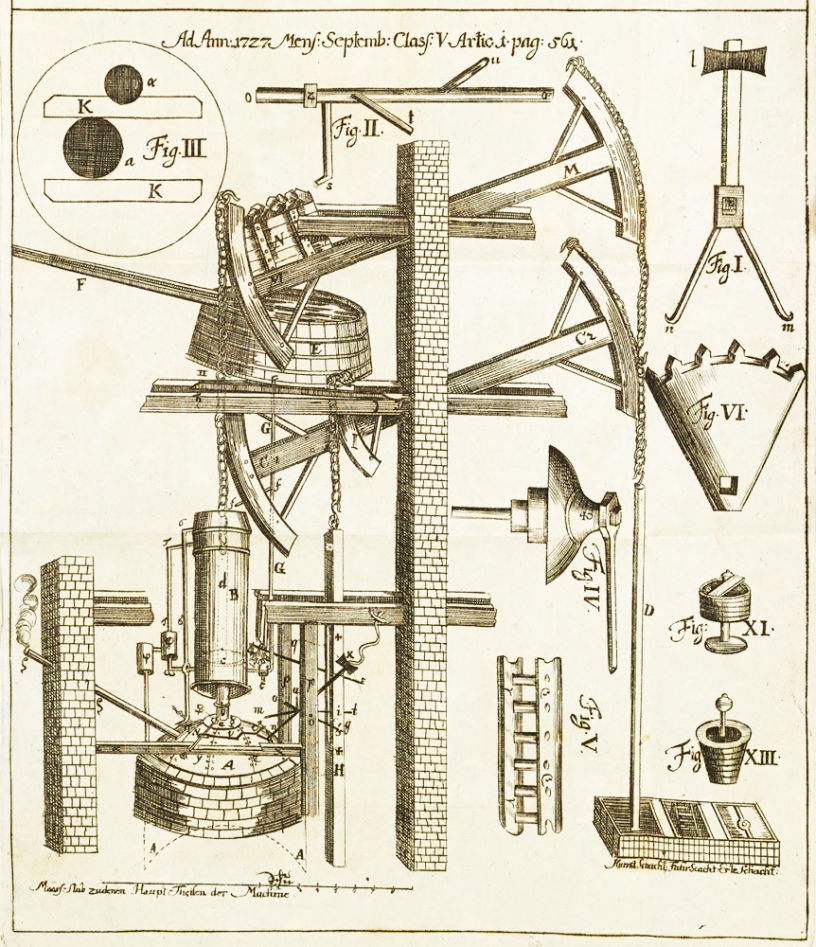 Depiction of the atmospheric steam engine in Nová Baňa by G. M. Kortum, 1727

The pumping engine was built by Potter at the state's expense at a cost of 16,000 guilders. After its successful start-up, the state leased the engine to a new mining company, to which the Court Chamber transferred the miningactivity in the local mines and forgave the levy on the extracted ore for 5 years. Thanks to the clever promotion of the engine and the wealth of ore in Nová Baňa, the mining industry grew and the price of its shares skyrocketed. Many personalities in Vienna were interested in becoming involved in the local mining business. The main shareholder in the mining business was the Emperor's personal physician, the knight Garelli. Potter was in charge of the operation of the pumping engine, and his partner and later brother-in-law, Jean Grill Costebadie, was the authorized director of the mining company. Potter and Costebadie were married to the daughters of W. A. Deutgen, the mining superintendent, at Nová Baňa in 1727.

With the help of Joseph Emanuel Fischer's excellent knowledge of mathematics and mechanics, most of the design flaws of the newly built einie were eliminated and it was able to show its pumping power in full operation, matching the power of four gins driven by sixty-four horses.

According to contemporary information, the machine pumped approximately 23,000 litres of water per 24 hours in the early years, making 13 strokes per minute. Its three long plunger pumps drew water up to the level of the Hronská Hereditary Shaft. In 1727, a new Karol shaft was started near Althandel, and plans were even made to build a second machine at a cost of 20,000 zl. However, the colliery was losing money and, moreover, Costebadie fled with the colliery treasury before the first five years were up. This, together with the operational problems of the mining company, led to the bankruptcy of this mining business and the state and city took over the operation of most of the mines. By the middle of 1729, the engine stopped pumping water and the deep horizons were abandoned and flooded. 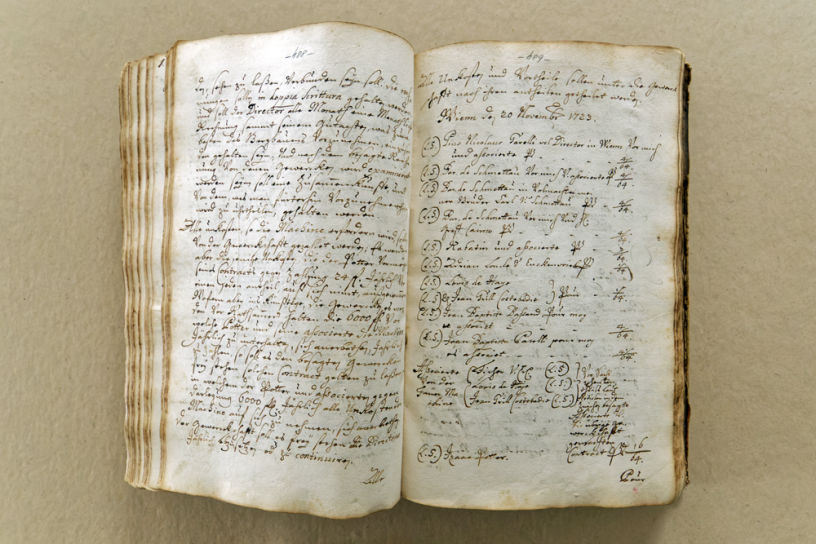 Pumping water with steam was a unique innovation. The fact that the first atmospheric steam engines were launched in Central Europe only 10 years after the first Newcomen engine was unique for that time. That is why the Newcomen pumping machine attracted experts from all over Europe who wanted to see this unprecedented innovation. Already in 1722, as the first foeigner, the young German mining expert Ch. Seidensticker took a look at this engine a wrote a first description of it.

Subsequently, a number of mining experts and scholars came to Nová Baňa, travelling through the Habsburg Empire. A. D. von Schönström was the first to obtain depictions of it in 1725 and two years later, the Silesian physician G. M. Kortum published further illustrations and a detailed description of the engine. In 1730 the German scholar J. G. Keyßler saw the engine. While it was still in operation, the physician and scholar F. E. Brückmann and the French Enlightenment philosopher Ch. L. de S. de Montesquieu also visited - Montesquieu was so intrigued by the engine that he made a special trip from Vienna to Nová Baňa only because of it.

„The English machine should only be used in mines where there is not enough water to run ordinary machinery and where it is necessary to use horses. It will pump one and one-half as much water as a gin with 8 horses, and costs less to run.“ 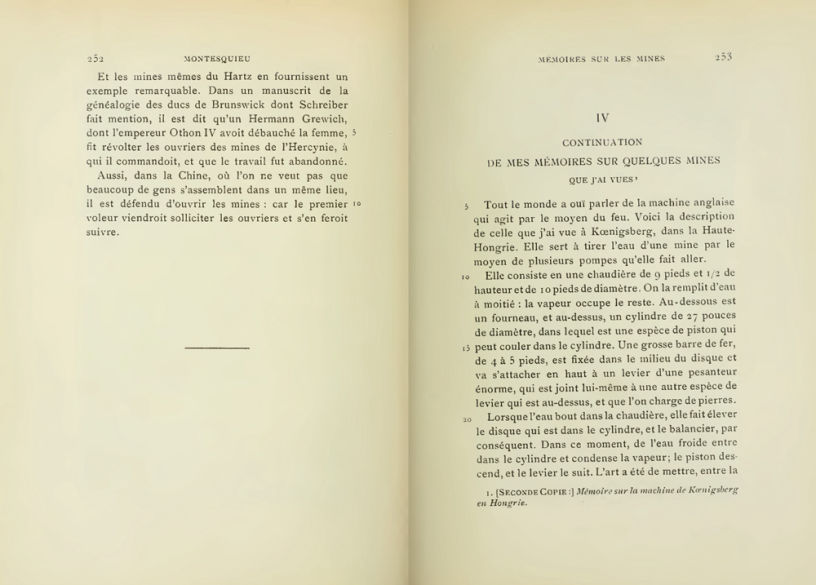 Closure and Transfer of the Atmospheric Steam Engine from Althandel

Even after the pumping of water at the Althandel shaft was abandoned, the engine was owned by the state, and it decided to take Potter into its own service. He was to build atmospheric steam engines at Štiavnické Bane, where the state mines were much more profitable. The pumping machine had only been in operation for 7 years at Nová Baňa. However, it remained there for another three years and Potter did experiments on it using coal as fuel. His first machine was subsequently leased to a private mining company in Hodruša, from where it was later to be transported to Banská Štiavnica, but this probably did not happen.

Potter and Fischer von Erlach subsequently built almospheric steam engines in Štiavnické Bane until their deaths. Between 1733 and 1734 they built two pumping machines at the Jozef shaft and immediately afterwards two more at the nearby Magdaléna shaft. The fifth machine was built by Fischer after Potter's death in February 1735. 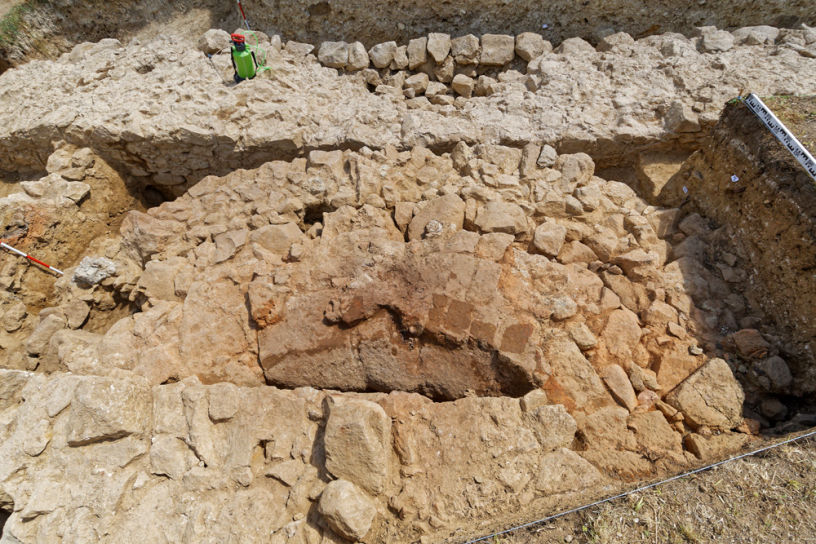 Part of the furnace, over which the atmospheric steam engine itself was located, was discovered during archaeological research at Althandel in 2021